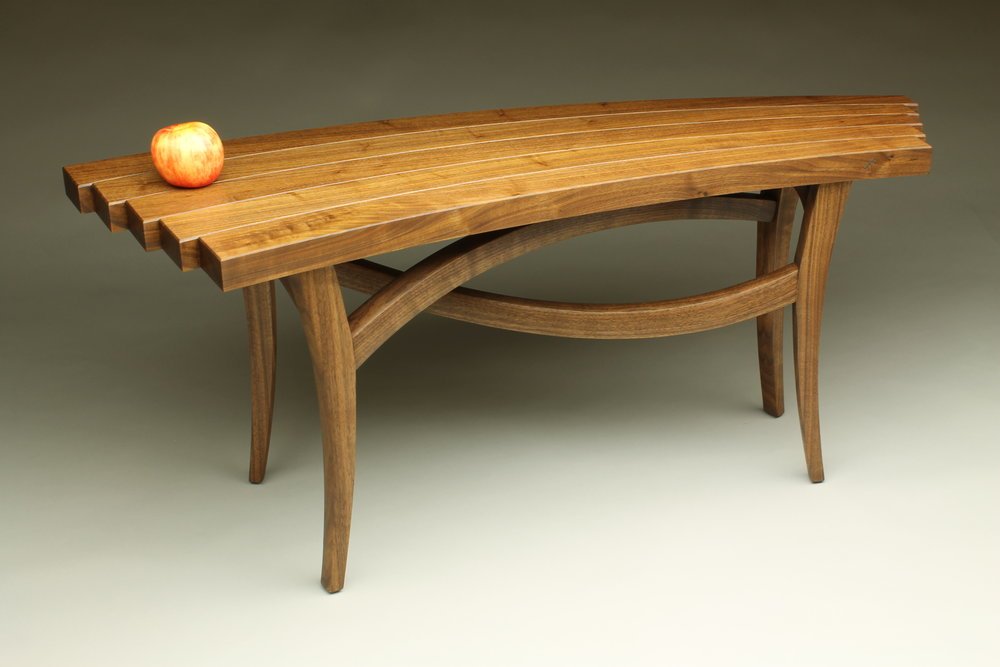 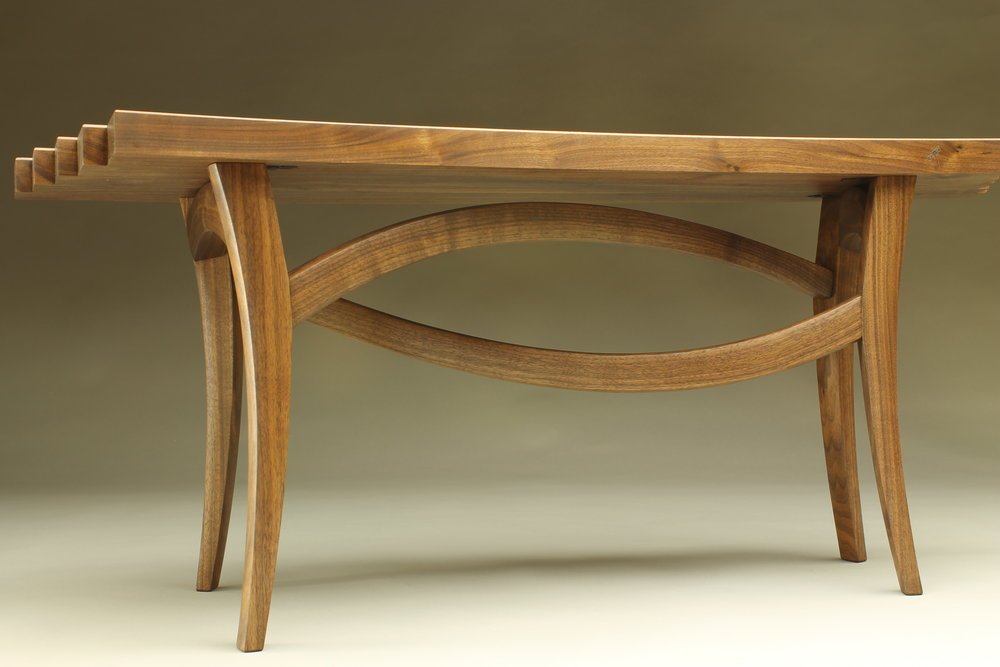 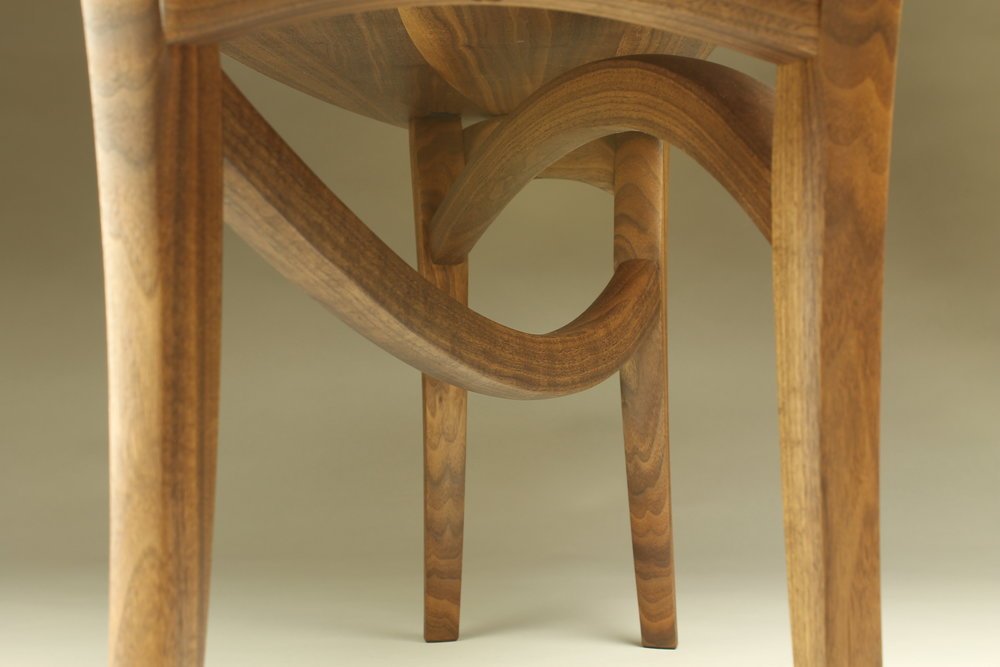 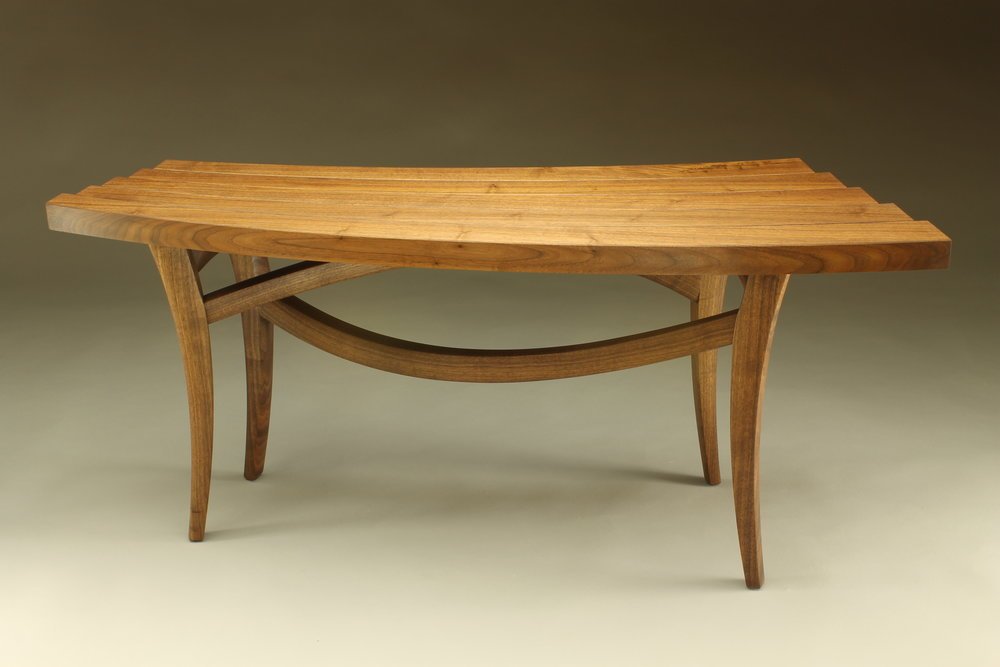 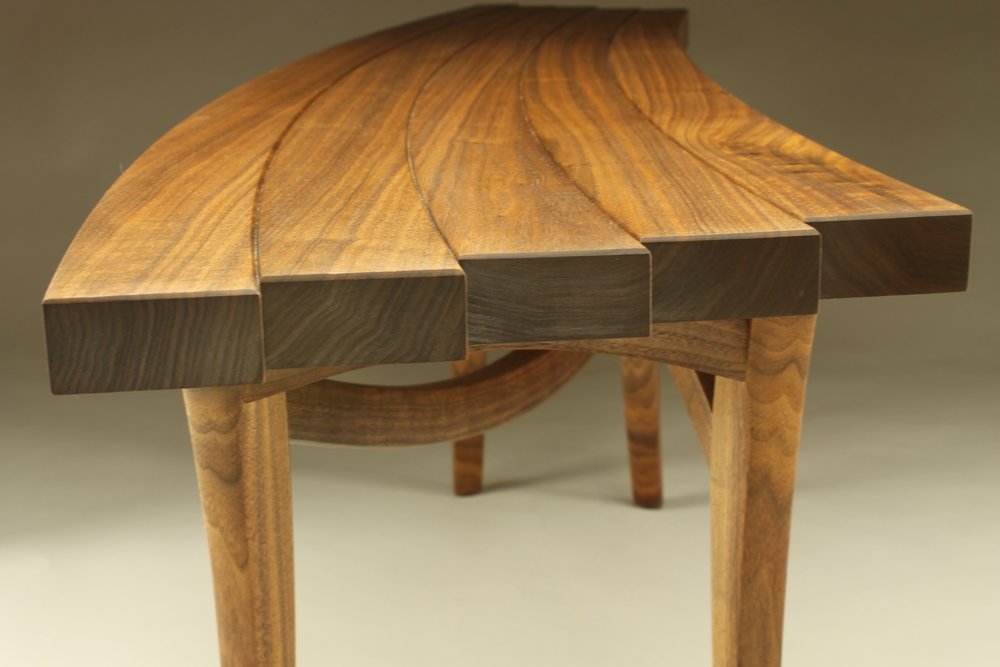 This bench was created at the request of a client who wanted a bench to fit into a small area in her entryway. Since the walnut had been harvested off of her property I knew that the wood had special meaning to her.

I started the ideation process in my typical way — sketching then making quarter-sized models. Fairly early on in the process I decided that the bench seat would be made of five nested, tapered curves, each one getting successively shorter. As I played around with designs for the structure of the bench I was intrigued by curved elements and ultimately decided to create curved stretchers that would connect the legs diagonally. As I modeled this I fell in love with the twist that was created and the way the stretchers looked when viewed from the end of the bench. This relationship of the stretchers is why I call this piece Helix. Because the piece is asymmetrical you get a different view from each side of the bench.

The major technical challenge for this piece was the creation of the bench seat. I mocked it up in construction lumber so that I could understand the geometry of it and figure out the process for making perfect curves that would mate precisely with their neighbors. Another important element of this piece is the curved stretchers. To create them I first steamed the walnut ‘blanks’ then bent them around a form and allowed them to dry. The steam-bent stretchers were further sculpted later in the process. I love the aesthetics of steam-bent parts because the grain follows the curve. Also the stretchers are much more structurally sound as steam-bent parts. Had I cut this shape out of a wide board it would be weak where the grain ran roughly perpendicular to the shape. Since the legs curved I wanted the stretchers to match that curve where they joined. I created a special jig that allowed me to use each leg as a pattern. I was able to run my router against each leg to create the opposite shape on the ends of the stretcher so that the convex arc of the leg would be identical to the concave arc of the stretcher.

The legs and stretchers were all hand sculpted to include hardlines. I feel that furniture should be explored as much with the fingers as with the eyes and I find hardlines to provide a tactile element to the piece. The bench seat also has tactile elements as part of its design. The piece was finished with a blend of boiled linseed oil, turpentine and spar varnish and hand rubbed to a soft luster.

I thoroughly enjoyed the creative and technical challenges of this piece. I hope it brings enjoyment and delight to those who see it.