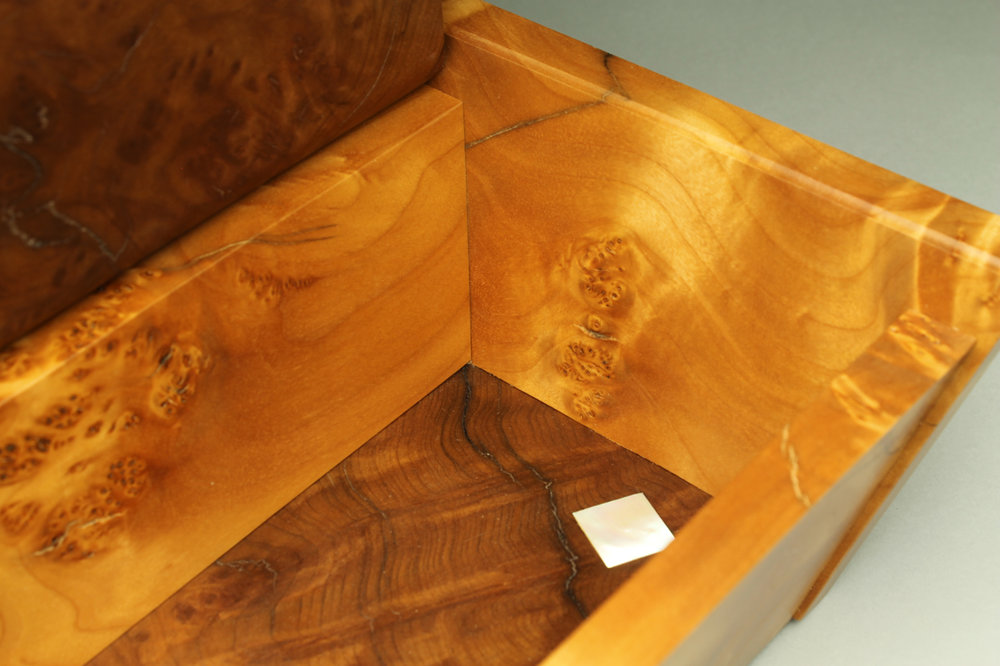 This box was created at the request of a client who recently had some lumber milled. He wanted something pretty to look at while I was working on a longer-term project for him. This is a design I had been wanting to try for awhile so I was pleased to have the opportunity to make it.

The box is a bit of an inverted pyramid with all of the sides tilting out at 15o. Working with angles is tricky since tools are typically used in a 90o relationship to the material being cut, bored, routed, sanded, etc. Because I wanted the sides to tilt I had to make specialized jigs to hold the parts for all of the tooling operations.

Learning how to work with both of the woods was a bit of a challenge as I had not worked with either of them in the past. The blistered big-leaf maple came out of the planer looking fuzzy so I ended up sanding it to final dimension rather than planing it. As it turned out both woods responded better to abrasive tools rather than cutting tools. Once I figured this out it was quite enjoyable watching the wood come to life as I sanded with finer and finer grit paper.

Another tricky bit was the lid, specifically how it opened. Because the sides of the box tapered in, I had to remove material from the back of the lid so that it could actually pivot open. There was a lot of back-and-forth as I removed a little material and tested the fit, then removed a bit more, and tested again.

The bottom of the box and the lid are both made of redwood burl. For the lid, I chose a section that had a bit of live edge on it. I just cleaned up the edge with a wire brush but felt no need to alter it in any way. I love to use these types of natural features in the wood I work with because I feel they speak to the history of the wood and help tell its story. This wood is particularly striking in its grain and the beautiful black cracks that run through it.

To embellish the box I chose to add delicate little cove details to the lid and sides. These details helps soften edges and also gives the piece a bit of visual and tactile interest. This was also the first time that I used mother-of-pearl inlay. The pearlescent white contrasts nicely with the richness of the bottom and lid. This material has a long history of being used to detail fine furniture and musical instruments.