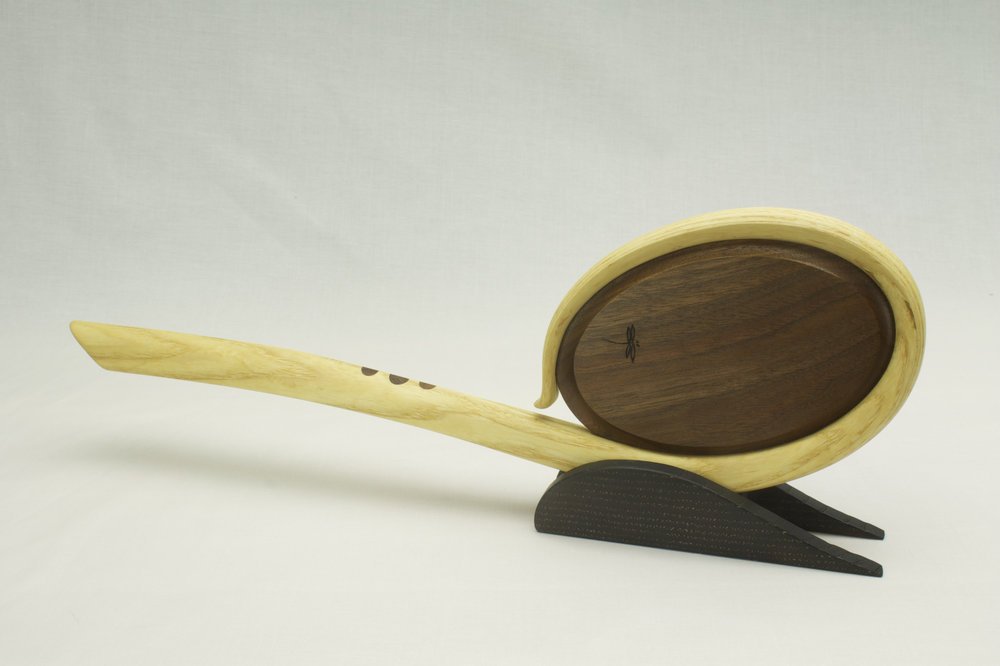 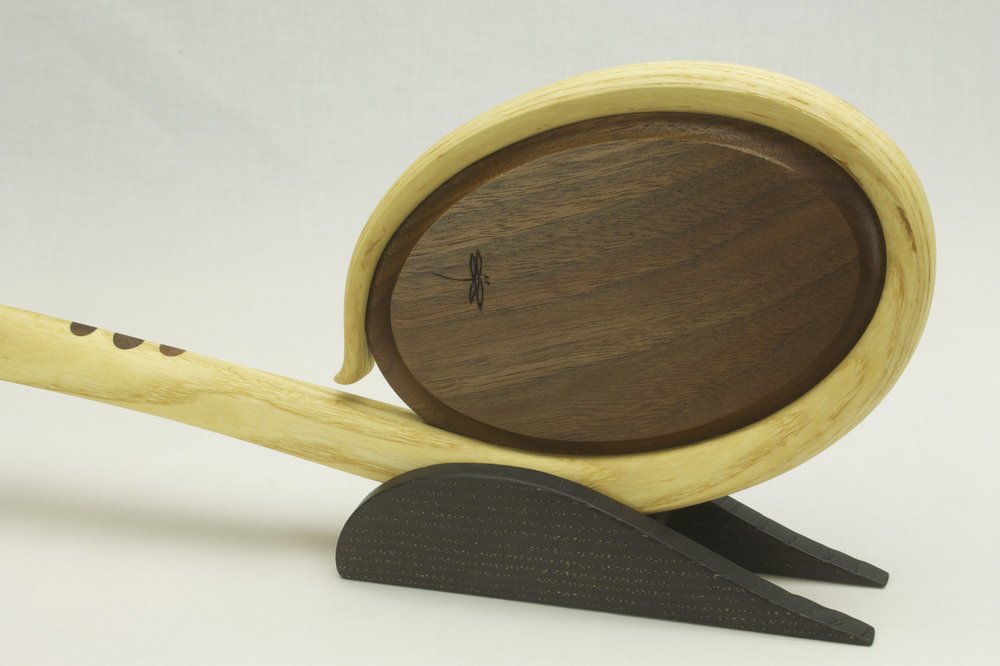 For me as an artist, the story behind a piece is almost as important as the piece itself. I believe it creates more of a bond between the owner and the object if the backstory of a piece is known. This is the story of how this mirror came into being…

I work exclusively in native hardwoods and get my lumber from sustainable sources – small mills, ‘found’ trees, urban sources and companies that sell reclaimed lumber. The ash used for the handle came from a small, family owned mill in Butler, Missouri. I personally selected the boards I wanted to create my mirrors. The walnut used for the back and decorative plugs was cut down in 1985 by two brothers clearing some family land in Lathrop, Missouri. It was milled and air dried in their barn until they decided to sell it in 2010.

The overall shape of the handle is achieved by a process known as steam bending. I love steam bending wood because it produces beautiful curves which the grain follows. Check it out for yourself by finding a grain line at the bottom and following it all the way up and around the handle. Cool, eh? Although the handle could have the same shape if it were cut from a big piece of wood it would not have the structural integrity or the beautiful aesthetics that steam bending produces. The process starts by cutting ‘blanks’ for the handles — long, narrow, tapered pieces of wood. The blanks are then placed in a steam chamber for about an hour to soften the lignin, the ‘glue’ that binds the wood fibers together. Once the blank has steamed, it is clamped into a bending strap that has a long lever attached. As I slowly pull the lever I ‘wrap’ the steamed blank around a bending form so that it takes on the oval shape of the mirror and the slight back bend found in the lower part of handle. As I wrap the form, I am causing the wood fibers to compress and slide past each other as they take on a new shape. You may sometimes see evidence of this compression on the inside face of the bend where some localized wood fibers are much more dense than their neighbors. Once the wood has been fully bent around the form it is allowed to rest in its new shape for about 10 days before I start the sculpting process. I call steam bending ‘controlled chaos’ as it requires the rapid application and removal of many clamps during the bending process and it would be much easier if I had 4 arms. Fortunately my husband contributes both of his and manages the clamps while I do the bending!

I need a bulky blank to withstand the pressures of bending but the finished handle is much more delicate. I taper the handle in two directions — it is wide and thick at the bottom but becomes narrower and thinner where it cradles the bottom of the mirror. I remove much of the extra wood using a bandsaw and rotary carving tool. Once the handle is roughly to shape I do all the final sculpting by hand using rasps, files, card scrapers, sandpaper and a whole lotta love! I like to include ‘hard lines’ during sculpting because I think they add interesting visual and tactile elements to the final shape.