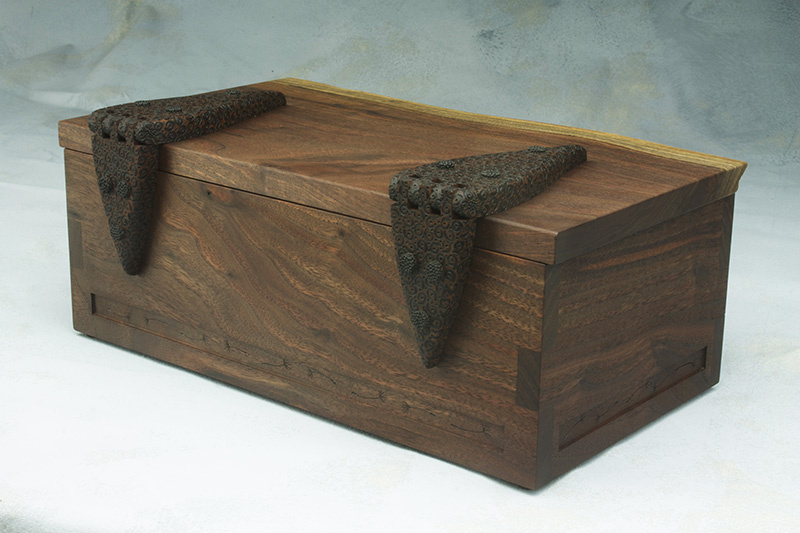 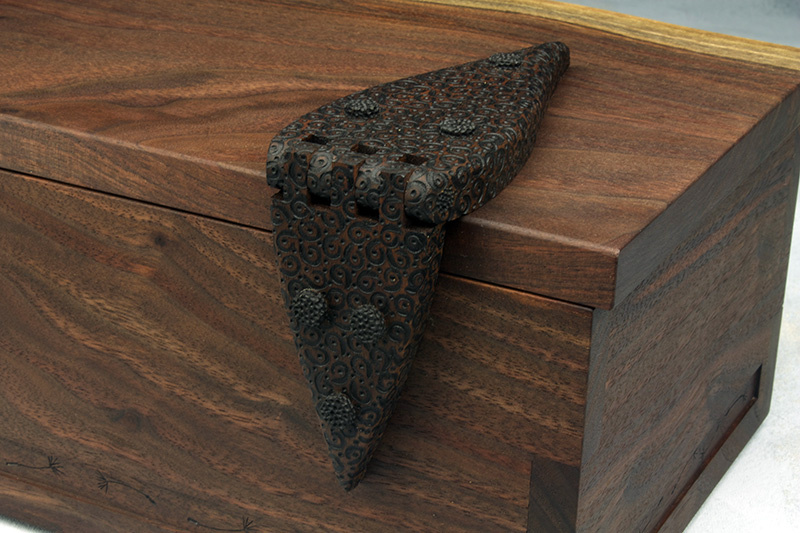 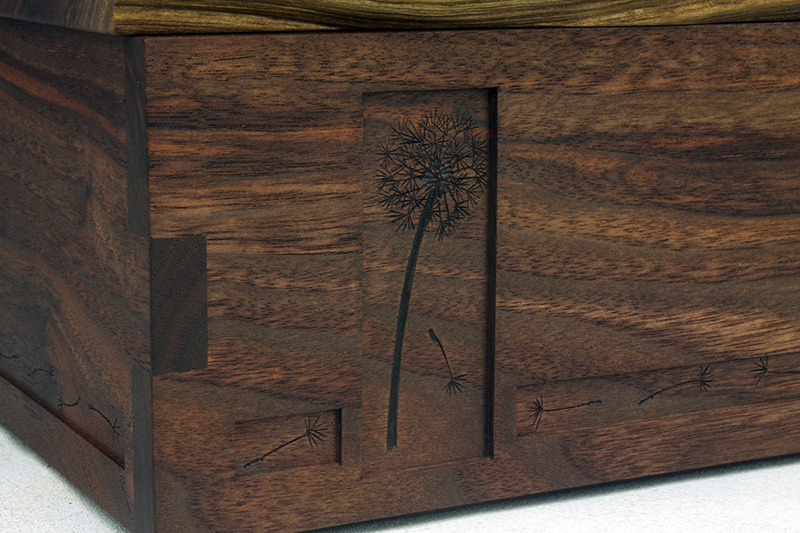 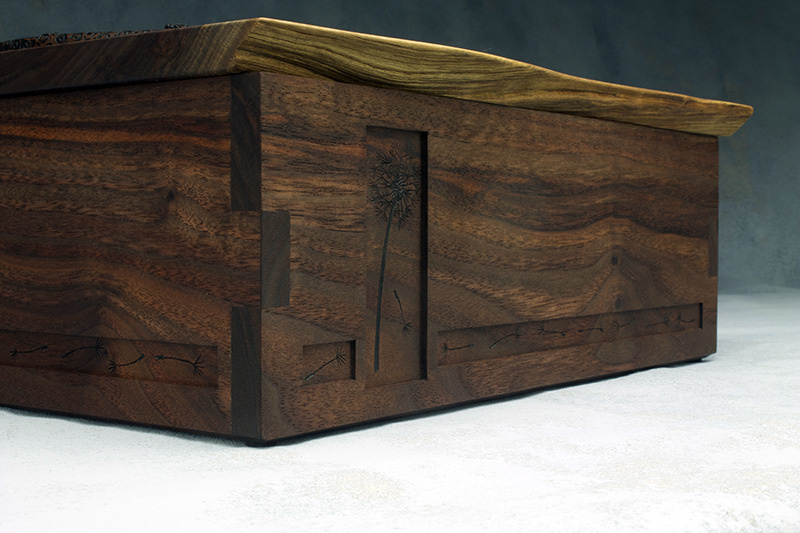 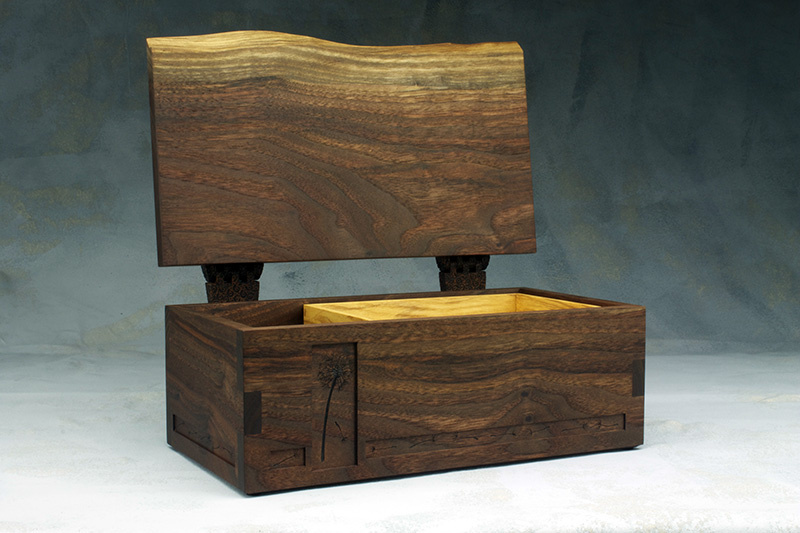 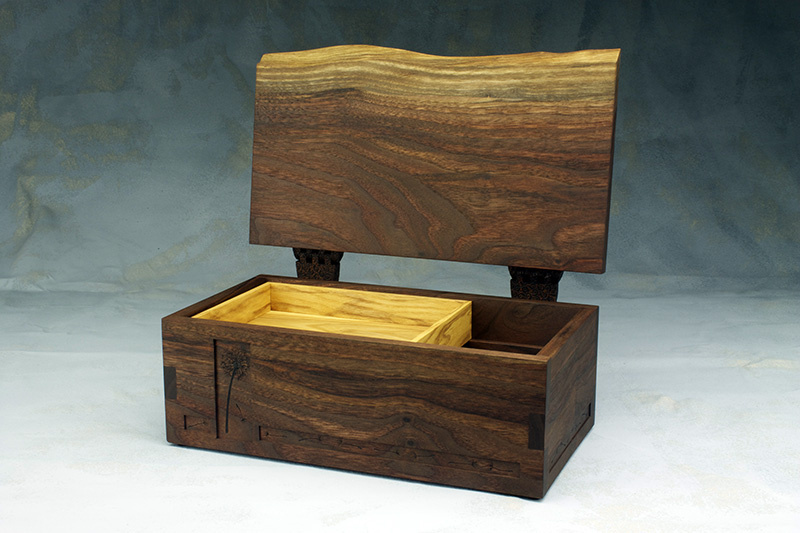 For me as an artist, the story behind a piece is almost as important as the piece itself. This is the story of how this walnut box came into being…

The walnut used to create this box was cut down in 1985 by two brothers clearing some family land in Lathrop, Missouri. The lumber was milled, stickered and air dried in their barn until they decided to sell it in 2010. Because of the intense purple coloring I suspect that this was a standing dead tree, rather than a live tree that was cut down. The tray is made of reclaimed ash, a wood commonly used for baseball bats and bowling alleys.

I made the majority of the keepsake box out of a single plank of this walnut. The sides, the lid and the bottom all came from the same board. Even the hinges (yes, they are wood!) and the plugs in the hinges came from this wood. If you look closely, you will notice that the grain flows harmoniously around the box as each piece for the body was cut sequentially. I selected this particular part of the plank to be the lid so that the natural edge of the log could serve as the handle. I like the texture of the edge and contrast in color between the heartwood and the sapwood.

I chose to use big box joints to construct this box. They are strong and decorative and the square edges are repeated visually in the square edges of the ‘windows’ used to decorate the box. I made the bottom out of solid walnut, rather than plywood used for most boxes. To make the bottom, I sliced a thick piece of walnut into two thinner pieces, ‘book matched’ them and joined them. The wood hinges were a lot of fun. I cut out the basic shape using my bandsaw. I further refined the shape using rasps, files and sandpaper. I like my wooden hinges to have a lot of texture. To achieve this look, I used a technique called pyrography (wood burning) and custom-made wire tips to add the texture. To make the plugs in the hinges, I first created a long, narrow square strip of walnut. I turned the square into an octagon using a hand plane. Once I had an octagon, I used a hand plane and sandpaper to turn it into a dowel. I glued the dowels in place, cut off the extra and added texture to them using pyrography. I chose to embellish the box by creating ‘windows’ and then using pyrography to engrave a design of dandelion fluff. This design was inspired by the view out my studio window one lovely spring morning. I do the final shaping, sanding, rounding over of sharp edges, etc., by hand rather than using some sort of power tool. This is when I can get up close and personal with the wood and see its beautiful grain emerge as I sand with finer and finer grit papers. I also like the slight variations that tell you this item is hand crafted rather than made impersonally, at a distance, with power tools. Finally, I finished the box by saturating it in three coats of Tried and True Original Wood Finish, a non-toxic blend of linseed oil and beeswax.